According to Wikipedia (which we all know is 100% right 100% of the time), a wayzgoose was at one time an entertainment given by a master printer to his workmen each year on or about St Bartholomew’s Day (24 August). It marked the traditional end of summer and the start of the season of working by candlelight. Later, the word came to refer to an annual outing and dinner for the staff of a printing works or the printers on a newspaper.

Gaspereau Press in Kentville, Nova Scotia has a Wayzgoose every year as a chance to open their press to the public.  This year I got the chance to go with some friends, and it was a pretty fun time.  Gaspereau Press makes some really nice books (the books and covers and works of art in their own right), and their press is a mix of old and new methods.

If you’re not a total bibliophile this might not be for you, but if you’re like me and you love tiny little letters and using presses and inks and looking at different fonts, this is awesome.

They were selling off-cut paper, they had lots of books for sale, there was a papermaking demonstration (the guy was making paper out of blue jeans, which is crazy!), and you could roll out a poster.  They also had a lead-casting area where you could cast something and then press it onto a piece of paper and then use that paper to make a small book. 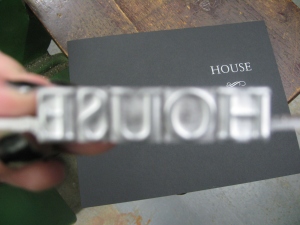 I was way too excited about this.

Everyone who works there is great and it’s a wonderful look into the world of printing.  As a fun day away from the big city, it was time well spent.

One response to “Wayzgoose. Wait, what?”