When faced with a map I usually have a really good sense of direction – unless I’m in Brugge.  I do enjoy places liked New York where the roads were designed by someone with OCD, but I’m from a place where roads were put wherever they fit (I’m looking at you CB and St. John’s).  Still, I did not expect Brugge to be so damn confusing.

A (my friend), O (the Mexican exchange student/new friend) and I took a train to Brugge one day.  The train station is outside the city (which is almost entirely surrounded by water), so all we had to do was start walking east and we’d get into the city.

To this day I’m not sure how we managed to make it into the city – whether it was due to signs, luck, or a combination of both – but we somehow landed in the middle-ish section of the city.  There was wandering, looking at things (Belgians are great at making lace, FYI), waffles…

Then there were scooters.  The task of getting said scooters was not particularly easy, but we got 2 scooters for the 3 of us and off we went.  Since we didn’t have a map we just drove around town (switching around so that we’d all have a turn to drive).  Mostly we hunted down the windmills that were on the outskirts of the city.

Sadly, we did not go all “Don Quixote” on them.

It got cold and even started snowing a bit, so once we returned the scooters we went hunting for a place with warmth.  It may have been our mistake to run for the first place we saw a fire without first checking whether it was fancy or not, but we were cold.  It turns out that the place was fancy and looked down on us for ordering only hot chocolate.  What was worse was that they used spoiled milk and our hot chocolate tasted horrible and it took forever for them to understand the problem and bring us new drinks.

But once we were out of that restaurant things were bound to get better, right?

Getting back to the train station proved to be more difficult than originally thought.  Perhaps our luck was no longer with us (it probably ran out just before we stepped in that restaurant).  We walked west, but we weren’t sure if we weren’t heading in the right direction.  So we consulted a map. 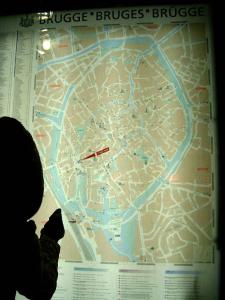 If these maps did not exist we probably would have ended up in France.

According to this map all we had to do was walk North-East and we’d end up at the train station.  So we walked.  When we found another map we saw that we’d gone too far North and (surprisingly enough) West.  Damn.

Looking back at this map I’m amazed that we were able to stay lost for so long.  Maybe Brugge did not want to let us go and was magically switching the streets so that we’d have to stay.  Or maybe we just had no sense of direction.  Whatever the reason, we made it out of Brugge – just much, much later than planned.