(Or at least pretended to be cultured, which is just as fun.)

R and I visited 2 places while in St. John’s – The Johnson Geo Centre and The Rooms.  Not only could we learn things, but we could also be indoors and warm.  Or, in the case of the Geo Centre, underground and warm.

The Johnson Geo Centre is mostly underground and is heated by geothermal wells.  That’s pretty cool (if you’re into geothermal heating).  When we first arrived at the underground location (now it sounds like a scene in a Bond movie), I spent the first 5-10 minutes taking pictures of the planets hanging from the ceiling.  Planets are cool. 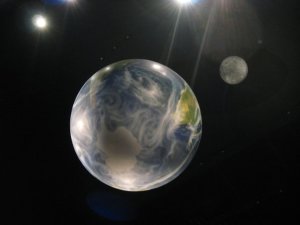 So that’s what the bottom of Earth looks like.

We wandered through the place, looking at stuff.  We went into the Titanic Exhibit, which was pretty okay except for the instrumental score of “My Heart Will Go On” playing over and over and over…

They had an amazing thing where you could look up constellations that I can’t quite remember.  And there was a really cool exhibit with sand which measured the average human life, how long it’s been since Dinosaurs were on earth, and the beginning of the cosmos.  It really puts humanity into perspective.

But enough about learning, let’s get artistic! 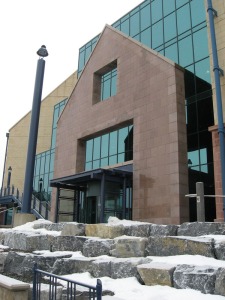 The entrance to The Rooms looks like A House.

The Rooms are a bit of a “point” with Newfoundlanders.  While it does take up a chunk of the landscape and stick out like a sore thumb in any picture of downtown St. John’s, it’s good to have a place where we can show off all the artistic talent we have on this island. 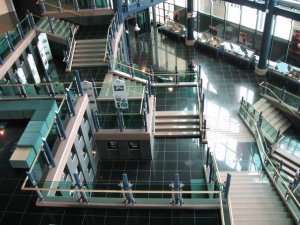 Also the inside is beautiful and Escher-like.

They had some educational exhibits as well as art exhibits.  For example, I saw the size of a raven in relation to the size of a crow – and man ravens are huge.  No wonder Poe didn’t want one hanging around.

I don’t remember the names of the artists (thanks to my bad memory), but there were some really interesting exhibits.  One such exhibit revolved around icebergs and there were a lot of mixed-media paintings/sculptures/etc.  While there weren’t a lot of “big” names, there was some damn good art.

And there were some excellent places for photographing the city… 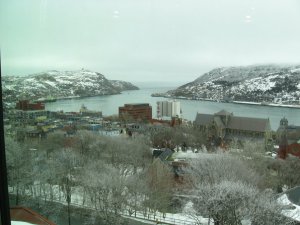