In August of 2010 my Sister and I planned a Euro-Trip.  We would travel from Nova Scotia to Berlin to Vienna to Frankfurt to Dublin to Paris and back to Nova Scotia.  Why?  Well, why not?

It all started with my sister’s quest to see U2‘s 360 Tour as many times as possible.  With her work schedule she couldn’t see all the shows (seriously, who has the time and the money to follow a band around – it’s time consuming and expensive).  She’d travelled to the USA and around Canada, but then she learned that they were doing a tour in Europe.  So why not?

We decided to see the show in Frankfurt (I can’t remember why, but there was a reason).  Then we decided to expand.  What about Berlin?  I’m a sucker for WW2 history so I couldn’t pass up the chance to go there.  She had a friend who was in Vienna, so why not there?  Also, we’d always wanted to go to Ireland…

Some places didn’t make the cut (we didn’t have time to visit the Edinburgh Fringe or Belgium), but we still had more than enough countries to keep us occupied.

I started learning German – which was a hell of a lot easier than learning French.  After a couple of weeks I could count up to 100 in German easily (trust me when I say that numbers will come in handy when buying baked goods).  If I could have communicated only in numbers I’d have been fine, but other than saying my name, different variations of “hello”, and knowing colours and fruits, I wasn’t much good for actual communication.

…Though by the end of the trip I could order a mean still-water and cup of cappuccino with cream (in Viennese slang).

I know that some of you will go “That’s not a real Euro-Trip!” because everything was planned.  We had our flights and hotels booked long before we left.  We didn’t just show up in Europe with a backpack and a month-long train pass.  But still, we saw a lot of stuff and travelled on more planes than I care to think about.  We did a trip around Europe, ergo we Euro-Tripped.

Besides, there’s no fault with being well informed.  I’m not a big fan of being stuck in the middle of a city with no idea of where anything is – especially in a city where I don’t know the language.

What the heck is a “Platz” anyway?

Thanks to my meager German lessons I know that it means “Square”.  Go me!

Besides, how confused would you be if you travelled all the way from Canada to Berlin and had to face this: 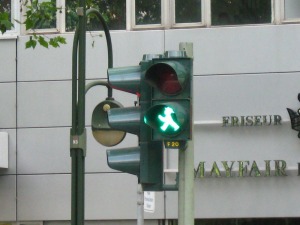 “Does he want me to start a conga line?”

Okay, maybe you have more intuition than that.  But it still doesn’t hurt to do a bit of research.

Also, isn’t that the cutest walk signal ever!?  It’s a little green man wearing a HAT.  I had to stand on the road with my camera at the ready, waiting for the signal to change.  I probably looked a little crazy, but locals should expect that when the city you live in has awesome walk signals.