The past two posts might have seemed a little negative (for the record they weren’t negative – they were a PSA and a WTF respectively), so let’s concentrate on something positive – Free Stuff!

A beautiful day in the park.

The Public Theatre has created Shakespeare in the Park as a way for people to see Shakespeare for free.  While I was in NYC they were doing The Comedy of Errors, which is a play I studied in university (FYI: Shakespeare totally ripped off Plautus’ Menaechmi, but I’ll forgive him I guess).  To get tickets we were first going to have to wait…

We arrived at the Delacorte Theater around 11am and there was all ready a long line.  Some people were obviously pros at this type of thing, as they had brought blankets, chairs, books, food, and even a mattress.

Courtney and I joined the line and wondered if we’d get tickets.  See, we had no idea how big the theatre was or how many tickets they had to give out (they also gave out tickets online, but we decided we’d have better luck in line).  Luckily one of the theatre workers came by and, when someone asked him if we’d get tickets all the way back here, he said “you’ve got a good chance”.  From my experience I know that his response was theatre-employee-ese for “I’m 99% sure you’ll get tickets, but something crazy could happen and you might not, so I have to cover my butt and not guarantee anything.”  (I say something similar to this all the time at work.)

So we waited.  We took pictures of things, such as this heavily grafittied tree: 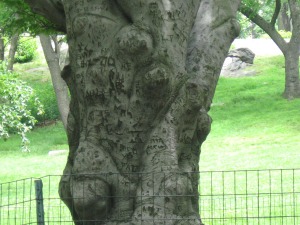 “Is that Peter or Paul written in the heart?”

And we took some pictures of the long line ahead of us: 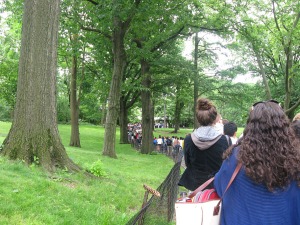 We’re so far away that you can’t even see the theatre.

The hour wait actually didn’t seem that long, probably because it was so nice outside, and before we knew it we were moving forward.  The worst part of waiting for free tickets is that you never know if you’ll get free tickets, but when you do it’s the best thing in the world! 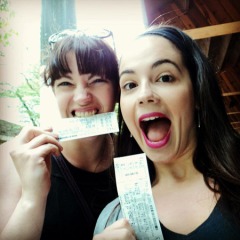 Courtney and I demonstrate how excited we are to get tickets. I bit mine to make sure it was real. (photo taken by Courtney)

It didn’t even matter that it started to rain that evening.  The show went on regardless of the weather (they rarely close due to weather so they perform rain or shine), and Courtney and I were more than happy to sit in the rain and watch the show.  The story is about 2 sets of twins who are separated during a storm, and the hi-jinks that ensue years later.  Jesse Tyler Ferguson played both Dromios and Hamish Linklater played both Antipholus’ (the Shakespeare nerds will know how cool that is).  The show was very “Mafia”, with a godfather, zoot suits, and more guns than Shakespeare would have known what to do with.  We also got treated to some swing dance interludes that couldn’t be stopped by a little rain.

Considering how expensive a ticket to a Broadway show can be (even at TKTS you’re looking at $70-$100 a ticket), it’s awesome to see a great show for free.  And if you really enjoy what they do you can always toss them a donation or buy some merch.  I’m all for spreading the theatre-love.