This trip may have been my 4th time in New York, but it was Courtney’s 1st.  NYC is a big city and there’s a lot to do, so it can be overwhelming trying to decide what you want to do.

You can always do what my sister and I did on our 2nd trip and try to do everything, but that can be exhausting (I get tired just thinking of what we accomplished in one day).  Besides, there was still a lot of stuff that we didn’t get to do, so even with our master plan we never accomplished “everything”.

Here’s what I tell people when they start to worry about all the things they have to do:

“Calm the hell down.”

Then I suggest that they make a list of some of the things that they really want to do – that they will be utter heartbroken about if the plane takes off and they didn’t get to do it.  This can be something like ‘go to a Broadway show’, ‘go to the Guggenheim’, or ‘see the Friend’s building’.

Or “eat all the cupcakes”.

After that I suggest that they make a list of things that they’d like to do – you know, if they have the time.  If some of these things fall in the same area, you can kill two birds with one stone.

In the end I did both on my “Must” list, and I did 2.5 things on the “Like” list (Brooklyn Bridge, Brooklyn Flea Market, and Central Park).  Central Park only gets a 0.5 mark, because although I saw the Delacourt theatre, the carousel and the South-West side of the park, I still haven’t seen Strawberry Fields or the Alice in Wonderland statue. 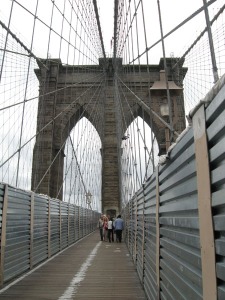 Walking across the Brooklyn Bridge. Sadly, nobody wanted to purchase it.

What does this mean?  Well, it means that I’m likely to go back to NYC at some point to try to do the rest of my “Like” list, but it means that I’m not losing sleep for not getting them done.  The majority of the “Like”s were not time sensitive, so they’ll still be there (hopefully).

Besides, I managed to do some pretty fun stuff that wasn’t on either of my lists:

Me acting like a fool on the wooden escalator in Macy’s. I’m partly terrified that the escalator will eat my shoes at the top if I don’t turn around in time.

I know that making lists sound lame, but they’re helpful.  You can look back and say “I didn’t do this, but I did do that.”  And since that is more important than this, you can feel satisfied.

And then you can start planning you next trip…