That’s why it’s good to have do-overs in life.  What didn’t impress you in 2004 might be really enjoyable in 2013.  This is the case for the Roman Baths. 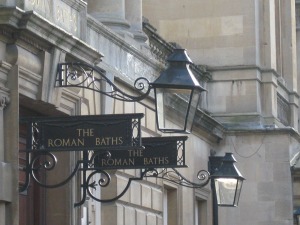 I get the feeling I’ve been here before…

School groups can be annoying, especially if you’re not in one of them.  A few school groups arrived at the Baths after us, and Kristen and I tried our best to avoid them.  I’ve also found that I’ve become more of a history/trivia buff these days. 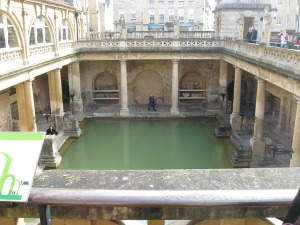 It helps that they’ve spruced up the place since 2004.  They’ve added a LOT more exhibits in the past years.  One of my favorites was about curses.  In Roman times they did an exorbitant amount of cursing.

They would write a letter to a god, asking for punishment for the person who had wronged them, usually specifying the punishment that they felt was appropriate – we’re talking sickness, blindness, even death.  Should someone be evil enough to steal a glove or a cloak, they could be wicked cursed.

And man were they specific.  Some curses stated that the culprit “whether they be man or woman, adult or child, free or a slave” was to be punished – you know, to cover all the bases.  Wouldn’t you hate it if you specifically cursed an adult before finding out that it was a kid who stole your favorite helmet?

These curses were usually written on lead and thrown into the baths.  My brain thinks that this is all kinds of wrong, but that was how it was done back then.

Such a healthy orange glow.

My favorite part of the Baths, though, had to be the commentary.  With your entrance fee you receive a hand-held guide that will provide information about all the exhibits.  I don’t usually like to use hand-held guides, but then I saw what the options were. 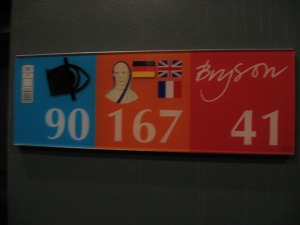 Channel “90” was for the regular/adult information, channel “167” was for young attenders, and channel “41” was Bill freakin’ Bryson!  Talk about making history interesting.  I wandered all over, looking for his commentary.  I didn’t listen to anyone else.

You can tell I was excited by how many pictures I took of this.

Curses and Bill Bryson?  I was in geeky/nerdy/history heaven!

I even managed to get a better picture of the inner/cold bath.

I wonder who gets to count all the money…

If these things had existed when I was in university, I probably wouldn’t have paid much attention to them.  Kids can be jerks like that.  Going back to the Baths was a great idea.  I’m glad Kristen wanted to go to, and I’m glad I was gung-ho for it.  It was a fantastic trip.

Chillin’ at the hot baths.