“Many Romans viewed the springs as sacred and threw valuable items into the springs to please the gods. An altar was also built at Bath so that priests could sacrifice animals to the gods. The waters at Bath gained a reputation as being able to cure all ills”

Nowadays you’re not really allowed to touch the water in the Baths.  You’re especially not allowed to actually bathe there.  This is fine with me, as friends have told me that the water feels gross and I’m happy taking their word for it.

But think of those days, back when the Romans thought that these were mystical waters that were able to cure any ailment.

You have to wonder if there’s still some magic there. 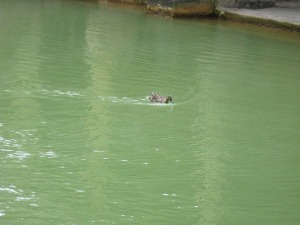 “I’ve eaten a lot of breadcrumbs in my days…”

On a side note, I wouldn’t particularily recommend drinking the fountain water at the end of the tour.  You might be curious, but you’ll end up with a mouth full of warm, metallic water (ick).  You might as well go lick a penny that’s been lying in the sun on a hot summer’s day (or a tuppence, if you prefer).