One thing we did do in Edinburgh is walk up. 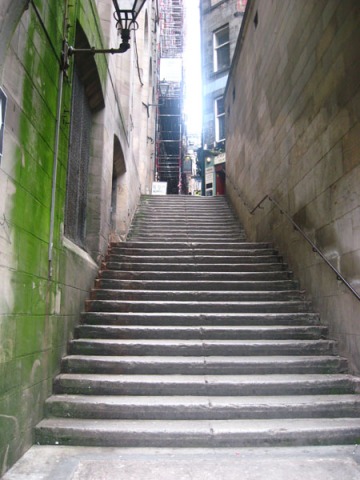 We were staying in Old Town, which is basically Hill Town.  It’s not that bad if you’re expecting the elevation, but we’d come from London, Cardiff and Dublin – all of which are relatively flat. I can walk forever on a flat surface, but put a staircase in front of me and I will huff and puff (and complain a LOT).

It makes sense if you think about it – Edinburgh Castle is in Old Town and the Scott’s wouldn’t build a castle on flat land.  The problem was that the castle was between us and our hotel.  Since both Kristen and I were new to the area we didn’t know the best way to get to the other side, and we ended up hiking up a billion stairs (possibly an exaggeration) with our luggage in tow.

After a couple of days of walking around Edinburgh we realized that there were other routes we could have taken (with less stairs), so the trip back to the Train Station was much easier. 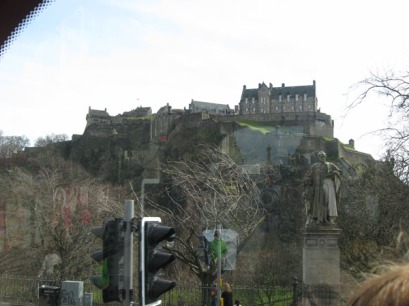 “So we’ve got to get to the other side of that?”

We stayed at the Premier Inn on Lady Lawson Street, which was super close to a Sainsbury’s (great for cheap food).  While the hotel had its idiosyncracies – for some reason the heat would turn off at night and we would wake up in an unpleasantly cold room – it was a good location and close to the Royal Mile.

I didn’t write down the path from the hotel to the Train Station, but I’m pretty sure it was this:

The route was stair-free, so I was happy.

We also had an easy way to get up to the Castle/High Street, which was to go to Grassmarket, and then go up some stairs (I thought it was Granny’s Green Steps, but now I’m thinking it might have been Castle Wynd S).  Then we just walked East until we got to Lawnmarket.

Kristen and I weren’t afraid to explore the city, so we found many different ways to get around.  Edinburgh is like a maze, only funner. 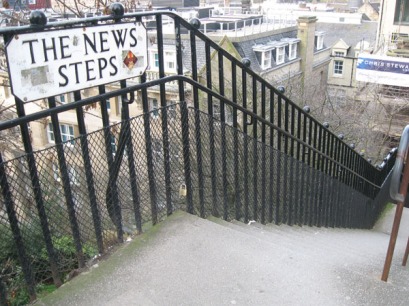 Here’s some news – there’s a lot of stairs in Edinburgh.

Well, except for the stairs…