As you’re all aware by now – I like to re-visit places.  Sometimes I feel like a criminal, always returning to the scene of the crime.  …except I don’t actually commit crimes, so I’m not really a criminal…  This simile is falling apart at the seams…

One such place was the Tate Modern.  When I’d previously visited it in 2004 I saw the most awesome thing:

I forget the name, but it’s got something to do with the sun.

It was right there, at the entrance.  It was really cool – the top half was a reflection of the bottom half.

I was excited to see it again when I went back – but it was not to be.  See, this area is known as the Turbine Hall.  This room is always changing, with new works of art coming in all the time.

It was cool, but I had ill planned my visit this time.  This time they were between exhibits, so I saw nothing.  No sun, no crazy large work of art…

Luckily I had the rest of the museum to look around.

Even the walls are artistic.

Aside from the sun, there was something else that I wanted to see.  My art history teacher had talked about interactive art – art that needed people to “use” it in order to be fully realized.  One such piece was a floor with 2 different types of tiles.  The purpose was to walk across the floor and hear the different types of sounds each tile made.

In 2004 that piece was being crowded by a school group, so I couldn’t get to it.  Not so this time… 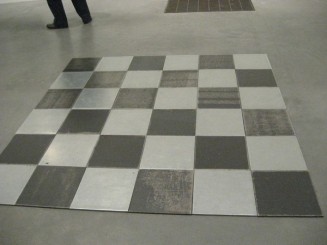 Yeah, I totally walked on that.

I didn’t take many pictures, other than this.  I keep going between wanting to take pictures to remember things and not wanting to be “that” tourist, ignoring the artwork. Truth be told, I’ve been in so many museums that I can barely remember what I’ve seen in each one.

I do know that I missed the Rothko works, which I wish I’d seen.  The Neptune Theatre in Haifax was playing RED last month, which is a play about Mark Rothko, and it was amazing.  Next time I’m in London, I’m going to look up those paintings, I can tell you that.