The Natural History Museum is right across the street from the V&A.  Also near by is the Science Museum (which I did not go to on this particular trip).  It ‘s like a little museum picnic in South Kensington.

I went in through the entrance on Exhibition Road, which leads to the Red Zone – galleries that explore the changing nature of Earth.  There’s a room with thousands of fossils, minerals, and rocks.  Mainly, I like the entrance room:

My favorite entrance to the NHM

I don’t know what I was doing, but the guy in the photo looks not happy with me.  Maybe he knows that this picture will be blurry – just like every other picture I try to take of this room… 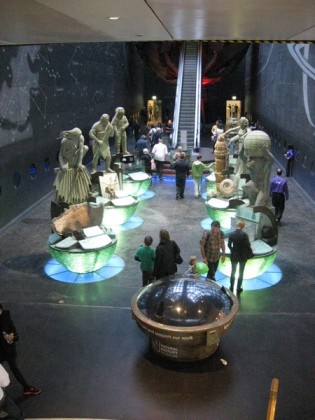 There we are – a better picture of the statues.  …It is less dynamic, though.

Here – have a close up of the walls:

I couldn’t find Libra, but I did find Orion (and his belt).

I wandered through one of the exhibits in the Red Zone, finding some skeletons of things (the names of which I can’t remember).

Then I was on my way to find some dinosaur bones!

The dinosaurs are in the Blue Zone (with mammals and biology stuff).  I can’t remember the date I went to the museum, but I think it was late morning/early afternoon, and I think it was a weekday, like Monday or Tuesday.

The dinosaur room wasn’t as crowded as when Kristen and I visited.  I remember it not taking long to get to the T-Rex area, and there was definitely no log-jam.  That being said, the animatronic T-Rex wasn’t my favorite part of the exhibit.  I’d rather see the bones.

The Entrance for the Blue Zone is on Cromwell Street, and you get to see a Camarasaurus skeleton as soon as you walk in (it’s a relative of the Diplodocus, which is in some ways similar to a Brontosaurus):

It’s quite difficult to get it all in one photo.

I think I was trying to be artsy or something with this photo.   I also seem to have been on the second floor.  Wow, my memory is a bit crap today.

Honestly, I never did biology in school (I did physics and chemistry instead), so the biology part of it all wasn’t as exciting for me as it would be for some.  Mostly I just like looking at skeletons, especially of giant dinosaurs.