I want to preface this post with a story.  Back in university I lived in residence, and one day some of the guys on my floor decided to have a malt-vinegar fight.  The fight consisted of them trying to douse each other in malt-vinegar.  The result was that the common room stank of said vinegar for a long time.  I have since very much disliked the smell of malt vinegar.

The thing is that the English seem to love malt vinegar and apple-cider vinegar, but not white vinegar.  If you like white vinegar on your fish and chips, be prepared to find none of it in the local fish and chips shop (such as the Tasty Fish in Old Harlow, or the place outside of the Tower of London).

I guess that’s true of all kinds of travel.  Chinese food in Canada is very different from actual Chinese dishes.  Sometimes you’ve just got to embrace the change and try something new.

Except for malt vinegar.  Maybe someday, but not today. 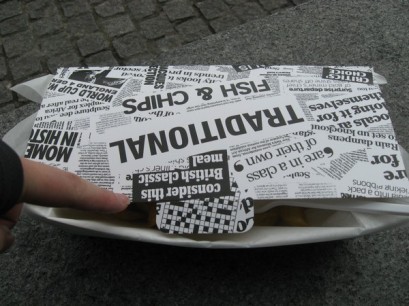 “May contain fish and chips, but not white vinegar”

My solution: salt and pepper.  Not the same, but still nom-nom-able.