It’s a good thing Toronto’s so flat and easy to walk around.  There were times where I decided to walk to my destination instead of taking transit – helped in part by the very nice weather the city was having during my visit.

As you can see, the sun was high in the sky.

I was going to the ROM that morning.  My plan involved taking the light rail to University Ave, then switching to the Subway to get to the Museum stop.

Toronto transit did not agree with my plan.

The first part went fine, I took the light rail to the Subway station, but then I ran into trouble.  I had no idea what to do with my flimsy paper transfer.  There was nowhere for you to “transfer” onto the subway and the turnstiles would not take my transfer.  I would have asked for help, but it appeared that … it appeared that the person working had stepped away and there was nobody there to help me.

I decided to catch a bus instead, but when I found the bus stop I became confused.  After reading the route information twice I started to think that the bus route didn’t run on Sunday (but surely buses run on Sundays in Toronto, right?).

I decided to play it safe and walk.

Heading up the avenue…

It was a beautiful day and there weren’t a lot of people around.  I headed towards the Museum, enjoying the nice weather and the chance for a walk. 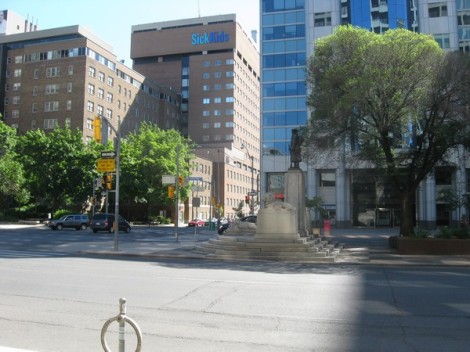 Eventually I reached a bunch of people doing a run/walk for charity.  That was likely the reason for the lack of vehicles/pedestrians (and why there wouldn’t be a bus on this particular day).

When I reached Queen’s Park I decided to walk along the park and enjoy the feel of grass under my feet, and the shade of the trees.  Toronto has a lot more trees than I’d expected.  Even in the above photo there are more trees then I thought a main road would have.  This is not a complaint – this is awesome.

So even though it took me much longer than expected to reach my destination, the journey was very pleasant indeed.