The Highland Games – The Parade

This summer myself and a couple friends (henceforth referred to as Randi and Lisa) decided to do a weekend roadtrip.  We planned to go to the Highland Games in Antigonish on Saturday, before heading to Liverpool (Nova Scotia – I wish it was England) for the night, and then exploring the South Shore on Sunday.

In case you’re not familiar with the geography of Nova Scotia, this was our path: 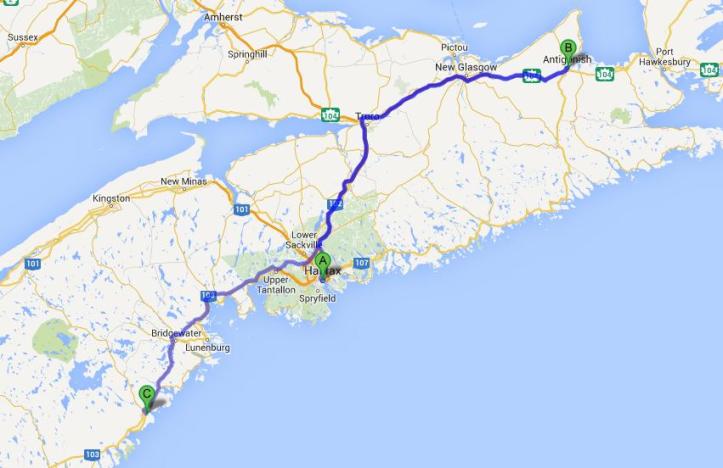 So we went from Point A all the way out to Point B and then we doubled back, past Point A and all the way to Point C.  Needless to say, we spent a lot of time in the car.

But that wasn’t difficult enough – oh, no!  We also decided that we should leave Halifax at 6am on Saturday in order to arrive at Antigonish in time for the 9am Parade!  (For the record, the 5:30am alarm I had to set was named ‘Oh dear gods this is early‘).

As you know, on a road trip you have to keep the driver entertained, which means no sleeping for anyone – even if you woke up at an hour of the morning that shouldn’t exist.

At least it was a beautiful day.

We arrived in Antigonish with time to spare, which was great because none of us knew where we were going.  Randi’s plan was to find a truck and follow it.  This plan did not work.  In fact, it didn’t work twice.  We ended up at a 4-way street light, which we turned right at, then did a U-turn, then made another right, asked for directions, then another U-turn, then another right turn.  That’s some kind of accomplishment, people.

Anyways, we got put on the right path.  Then we had to figure out parking.  Luckily Antigonish isn’t very big and almost everything is within walking distance.  We decided to park behind a bank on the main road and hop that we wouldn’t get ticketed (spoiler: we didn’t).

Even after all that we were still early for the parade.  So we did some window shopping.  During the Highland Games there’s a lot of tartan on sale.

Then it was time for the parade!

It started with the RCMP.  After what had happened in Moncton, it felt good to give them some honour and respect.  People clapped as they walked by – a thank-you for all they do.

Now, if you love bagpipers you’ll love the Highland Games parade.  (Randi does not like bagpipers, so it was hilarious for Lisa and me).

I only took 1 picture, because if I had taken pictures of all the bagpiping groups I’d have nothing put pictures of bagpipers.

The parade was… well, a typical small town parade.  I’m sure I would have gotten more out of it if I’d been a member of the community and knew the people marching.  It did have that small-town charm.

It had a lot of antique/expensive automobiles as well; but the craziest car award definitely goes to this one:

Both men were driving.  I actually feared for my life a little, because it was very erratic at times.  But they did have some neat tricks.

Actually, the scariest part of the parade was the clowns.  I do not like clowns.

Anyways, the parade eventually drew to an end, with everyone marching towards the park where the games were being held…